How We Compared Home Security Systems 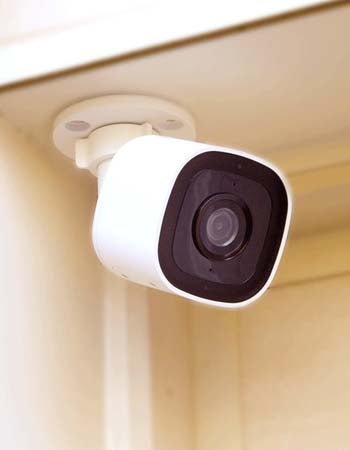 While home security companies can seem alike in many ways, there are set parameters that can be used as a basis for one-to-one comparison.

Frontpoint scores only a 1.12 out of 5 at the Better Business Bureau, but it has an A accreditation and has been in business for 15 years. There are only 199 reviews, so customers will want to take them with a grain of salt and consider that Frontpoint has closed 836 customer complaints within the past 3 years. Its score on Trustpilot is significantly higher at 4.2 out of 5 after 12,578 reviews.

When considering SimpliSafe home security system reviews, customers will find a similar- situation picture, with only a 1.35 out of 5 rating with the BBB, but a 3.9 out of 5 on Trustpilot. The majority of SimpliSafe reviews praise the customer service experience, while others talk about the quality of the equipment.

Verdict: Frontpoint and SimpliSafe are both highly reputed home security companies with generally positive customer ratings. Frontpoint is recognized for its fast and helpful customer care team, which can assist customers with installation, technical questions, and more general questions. SimpliSafe is more generally known for its low monthly costs that appeal to customers who don’t need their security system to sync with home automation devices.

Frontpoint is a DIY home security system with a wide range of equipment options. With options that range from doorbell cameras to motion and glass-break sensors, Frontpoint covers the home on a number of different fronts. Frontpoint also offers smart-home equipment like a smart door lock, outdoor smart plugs, smart thermostats, and more.

SimpliSafe offers similar equipment, and though it does have a video doorbell and a smart lock, it lacks the more robust smart-home options that Frontpoint brings to the table. Though its equipment is known for being high quality, SimpliSafe is more limited in what’s available.

Verdict: Both companies offer high-quality equipment that includes indoor and outdoor cameras, doorbell cameras, smoke and CO detectors, and glass-break sensors. However, Frontpoint’s list of equipment options is slightly longer and includes a range of smart-home devices that are lacking from SimpliSafe’s lineup. 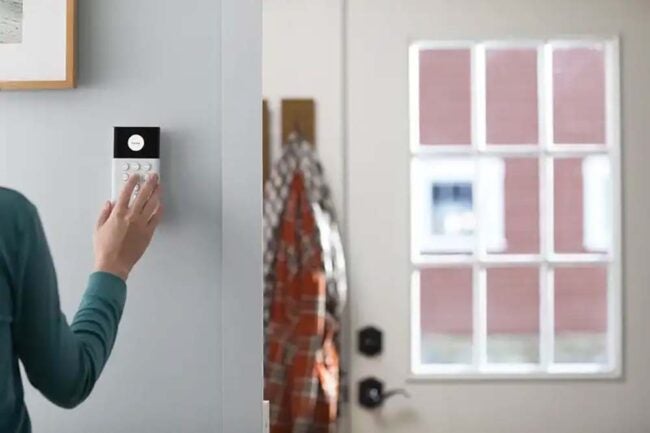 3. Frontpoint vs. SimpliSafe: Packages and Plans

Frontpoint offers a build-your-own plan and three prebuilt packages: the Starter Pack, the Home Shield, and the Family Lookout. The Starter Pack includes one hub and keypad, one motion sensor, and one door/window sensor, as well as a “home defense kit” that consists of yard signs and window stickers.

SimpliSafe offers a bit more in the way of options. In addition to a build-your-own plan, SimpliSafe has seven prebuilt packages. From largest to smallest, these are the Beacon, the Lighthouse, the Haven, the Knox, the Hearth, the Essentials, and the Foundation.

The difference between the two lies in the price. SimpliSafe is more affordable at nearly every level, as Frontpoint’s equipment costs can be incredibly high.

4. Frontpoint vs. SimpliSafe: Pricing and Fees

To offset the equipment costs, Frontpoint customers can qualify for monthly financing to help pay for the equipment. According to Frontpoint’s customer support, the basic monitoring plan is $49.99 per month, although the website itself makes it difficult to verify this information and somewhat blurs the costs.

How much is SimpliSafe? While SimpliSafe’s equipment isn’t cheap, it’s also made more affordable through steep discounts given at the time of purchase. Customers can choose between the main Interactive Monitoring plan for roughly $0.93 per day, or opt for the Self Monitoring with Camera Recording plan for $0.33 per day, making SimpliSafe’s monthly cost relatively affordable. 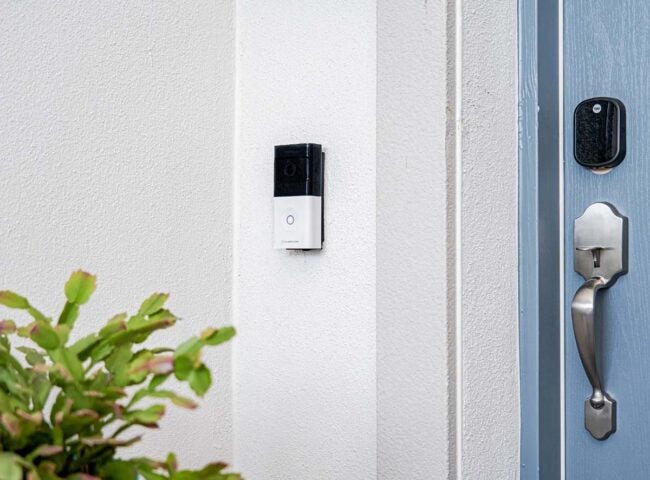 One of Frontpoint’s main selling points is that the system is DIY installation. There are no professional monitoring fees to contend with, which makes it easier for customers to cut out security camera installation costs. If support is required, customers can use the app to help.

Verdict: Both Frontpoint and SimpliSafe are DIY systems offering peel-and-stick equipment designed for quick and easy installation. However, while SimpliSafe has a professional installation option for customers who don’t want to install their system themselves, Frontpoint does not.

Frontpoint offers a single monitoring plan for $49.99 per month that includes 24/7 security monitoring; fast emergency response times; and fire, environmental, and life-safety monitoring. There are also other services, including Crash and Smash protection (which alerts the monitoring station if the control panel is destroyed and there’s a lack of follow-up signals like a door opening or motion-sensor activating), mobile alerts, light and smart-lock control, and much more. It’s a feature-rich service, but it comes at a steep monthly price.

How does SimpliSafe work? SimpliSafe doesn’t have quite as many features in its monitoring plans, but both options are more affordable. Interactive Monitoring is $0.93 per day and includes 24/7 police, fire, and medical dispatch; unlimited camera recordings; video verification; and 24/7 flood and extreme temperature monitoring. The plan also comes with a lifetime warranty for equipment as long as the subscription is maintained.

The Self Monitoring with Camera Recording plan is a bare-bones option, but it’s only $0.33 per day and intended for users looking for the best DIY security systems.

Anyone who has ever used a security system app knows they aren’t typically rated well, which makes Frontpoint’s 4.3 rating in the App Store a pleasant surprise. It has a slightly lower rating of 3.7 in the Google Play Store, but still higher than expected.

SimpliSafe has an even higher rating of 4.8 in the App Store and 4.6 in the Google Play Store, but it falls short for one reason: It’s much more limited. Frontpoint’s expanded capabilities extend to its app and allow customers to check their smart thermostat and adjust the temperature, monitor their smart lock, and much more.

Verdict: Frontpoint and SimpliSafe both have highly rated apps. But while both apps allow customers to arm and disarm their system, check video footage, and receive security notifications, Frontpoint’s app goes further: it can help customers with installation. Customers who have opted for the smart thermostat can also check and control their home’s temperature using the app. 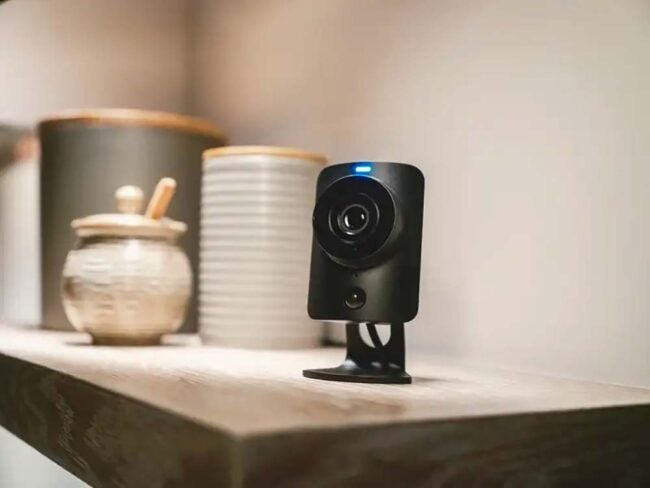 Home security contracts are rapidly becoming a thing of the past. This is a major benefit for consumers, who often found themselves locked into a contract for a system that no longer fit their needs. Frontpoint doesn’t require a signed contract (though the company says it uses “month-to-month” contracts), and the company offers a 30-day risk-free trial.

SimpliSafe doesn’t require contracts either. Though SimpliSafe doesn’t offer a true trial, it does provide a 60-day money-back guarantee if a customer isn’t satisfied with their security system. It’s practically the same thing as a free trial, and it’s a great way to test out the system in real-world applications.

Right out of the gate, Frontpoint’s 3-year limited warranty offers more beneficial terms to customers than SimpliSafe’s 1-year hardware warranty. Frontpoint’s warranty covers defects within almost every part of the system, minus screens, wiring, and light bulbs (as well as minor parts like batteries and foil tape).

SimpliSafe offers a 1-year limited hardware warranty, but customers who sign up for the Interactive Monitoring plan before that initial period expires can receive a limited lifetime warranty for the duration of the subscription.

Verdict: SimpliSafe has a 1-year hardware warranty, and customers with professional monitoring get an extended warranty. Frontpoint has a more generous 3-year warranty on equipment starting on the activation date, though the warranty excludes screens, wiring, and light bulbs.

Home automation is beginning to take center stage with many security systems. SimpliSafe systems can integrate with Alexa and Google Assistant to allow customers to arm or disarm their system. The company also offers its own smart lock as well as integrating with August smart locks, allowing customers to lock and unlock their door from their mobile devices.

Frontpoint takes it a step further by producing its own smart-home equipment and integrating the functionality directly into the app, giving users a much wider range of control over their smart home. Since this equipment is compatible with other systems, users can potentially extend that control to their entire home and not just Frontpoint products.

So which is better: SimpliSafe or Frontpoint? Though Frontpoint is a noteworthy security system, its higher costs and lack of customer-focused options make it a second choice to SimpliSafe. Frontpoint does stand out in the realm of home automation and warranties, but that isn’t enough to overcome the lower costs and greater level of security that SimpliSafe brings to the table.

SimpliSafe lets customers choose between multiple monitoring options, has a greater number of equipment packages, and has lower overall costs. It’s the more consumer-focused system, and though it lacks some of the bells and whistles of Frontpoint, it’s generally a better choice for home security for many customers. However, customers looking for a home security system that will integrate seamlessly with their smart-home devices will likely find that Frontpoint is the better choice.

business new go naturally
We use cookies on our website to give you the most relevant experience by remembering your preferences and repeat visits. By clicking “Accept All”, you consent to the use of ALL the cookies. However, you may visit "Cookie Settings" to provide a controlled consent.
Cookie SettingsAccept All
Manage consent